In recent years, Tribal Tattoos have enjoyed a revival. The originals go beyond the intertwined stripes of black shapes that are common today. Many of the ancient tattoo patterns have given away to swirls, spikes, knots, and totems that come from the imagination of the creator rather than any of the ancient tribes. 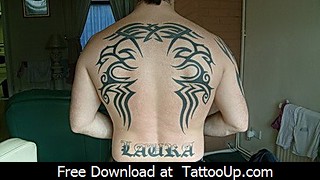 The tribal style of tattoos comes from the older tribes such as the Celtics (Ireland, Scotland, & Wales), Maori Tribe (indigenous people of New Zealand), The Haida Tribe (indigenous people along the west coast of North America), the Marquesan (Polynesian inhabitants of the Marquises Islands) and the tribes of Borneo. Native Americans also used tattoos to denote rank, wealth, tribe affiliation, family, role in society and deeds of bravery.

The Celts were a proud, warrior class who inhabited the English Isles before the Roman invasion 55 B.C. under Julius Caesar. The Celts were such a pain in the rear that the Romans built the Hadrian Wall to keep them away. But I digress; the endless knots inside and out of the outlines identify the Tribal tattoos of the Celtics.

The Maori tribes migrated from Eastern Polynesia around 800 to 1300 AD and were the first settlers in New Zealand. They developed their own language. The Maori were described as a fierce and proud warrior race. Inter-tribal warfare was a way of life, with the conquered being enslaved or in some cases eaten! The British exempted the Maori from conscription in WW2. But over 17,000 Maori Natives volunteered! The traditional Maori tribal tattoos are known as ta moko, and consisted of bold spiral designs covering the face. The tattooing process was a tribal ritual that made the use of bone chisels for tattooing. All I can say is this has got to hurt!

The Haida are North American Indians who were expert fishermen and seafarers who lived along the coast of British Columbia and Alaska. These people are well known as skilled artisans of wood, metal and design. They were also known as fearsome warriors who kidnapped slaves as far south in California. The Tribal tattoos of the Haida resembled pictures of the Indian astrology, thunderbirds, beavers, bears, and fish. The tattoo style of the Haida is forceful and masculine.

Sea-faring Polynesians from Samoa colonized the Marquises Islands as early as 300 A.D. They were warring tribes who sometimes cannibalized their enemies. The devastation of the native Marquesan occurred with the introduction of diseases from the European explorers. These islanders covered their bodies completely with tattoos. The Marquesan Islanders used their bodies as a living canvas that told picture stories.

Borneo is the third largest island in the world. The rainforest of the Borneo Island is very rich in biodiversity. The tribes of Borneo used tattoos for protection and proof of their achievements. Needless to say, they were notorious as headhunters. Their tattoos usually took the form of scorpions, flowers, dogs, dragons and spirals.